S2 is earning a majority interest in the Jillewarra project, located in the Murchison Goldfields, 50km west of Meekatharra in Western Australia.
The project covers 791.5km2 and 40 strike km of the Mingah Range Greenstone Belt, including the historical Chesterfield and Wardabie mining centres. Although the project area has been subject to intermittent prior exploration, drilling is of limited extent, effectiveness, and depth, and the exploration potential is high. 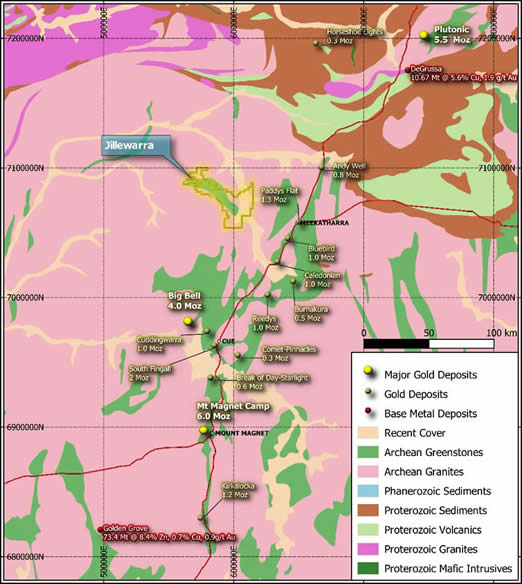 The Jillewarra Project covers the WNW trending Archean Mingah Range greenstone belt, which is 50km long and 9.5km wide. It comprises a sequence of basalt and fine-grained amphibolites, felsic and intermediate volcanics, shale and siltstones, intruded by layered gabbroic sills, metamorphosed to greenschist facies, and is variably deformed, particularly adjacent to the major structures.

The geology can be characterised by three main lithological groups, typical of Archaean Yilgarn greenstone sequences:
• A basal sequence of mafic to ultramafic extrusive rocks (high-mg basalt, basalt and ultramafic units and minor intrusives)
• An upper sequence of a mixed package of felsic volcanics, sediments, sedimentary iron formation (SIF) and minor mafic volcanics.
• Both sequences have been intruded by a series of differentiated mafic-ultramafic sills that appear to have preferentially intruded the upper volcano-sedimentary sequence. The intrusive sills are characterised by a peridotite-pyroxenite base overlain by a thicker unit of gabbro. 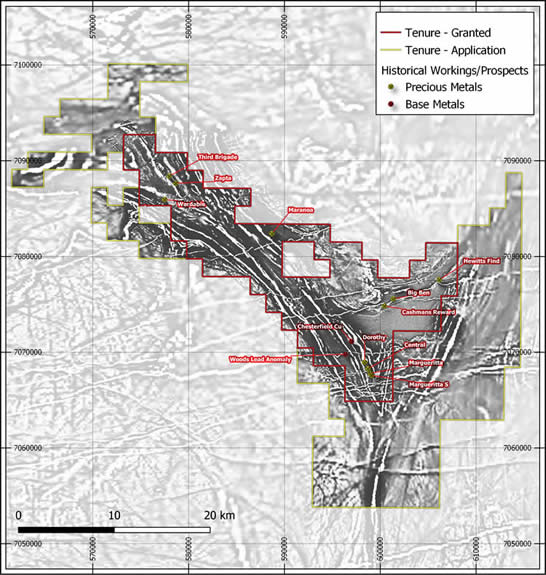 The project includes a number of areas of significant historical mining activity and numerous gold occurrences. The Chesterfield Mining Centre included producers like: Big Ben, Little Ben and Cashman’s Reward to the north and Dorothy and Margueritta Mines to the south.

Comprises narrow, sulphide rich quartz veins that dip to the southwest and plunge to the South, that have been drilled in the immediate area of historic mining activity but only to an effective depth of 70m below surface. Virtually untested along strike to the NW where hardpan and cover meant prospectors had no success.

Located approximately 1.5 km southeast of Dorothy along the same structural corridor, mineralisation comprises two sub parallel lodes, dipping to the northeast and plunging shallowly to the north, drilled to a maximum vertical depth of only 60m.

Mineralisation remains open at depth and down plunge.

The trend containing the Dorothy and Margueritta prospects is essentially untested at a depth greater than 100 metres and hardly drilled outside of the immediate environs of the historic workings. Limited RC drilling approximately 300 metres south of the Margueritta prospect has also intersected gold mineralisation, including 4 metres @ 5.2 g/t gold from 74 metres in hole CFC013. 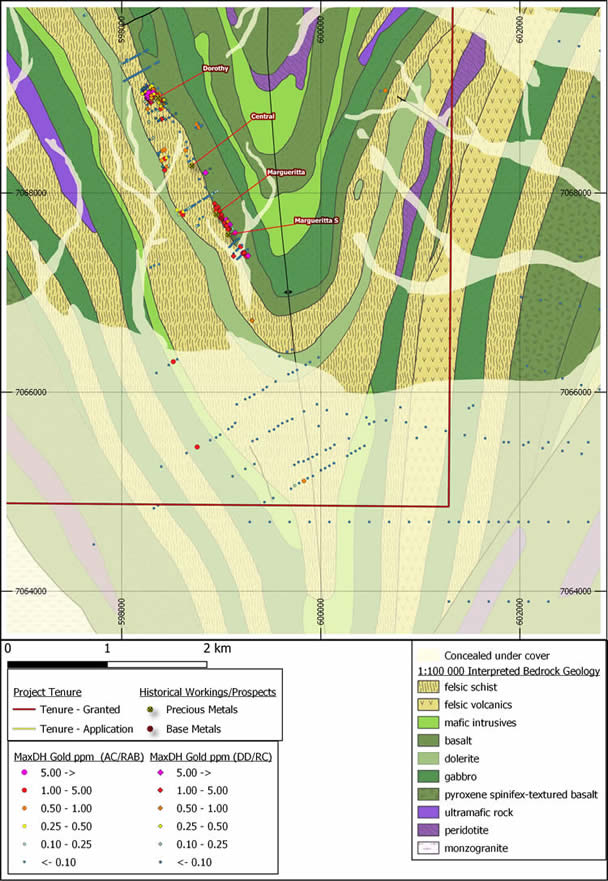 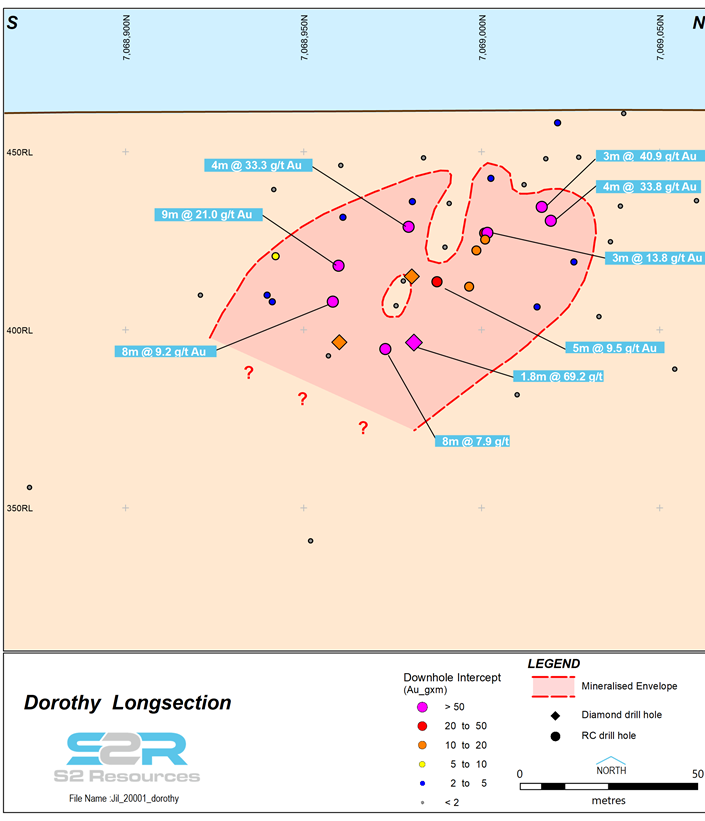 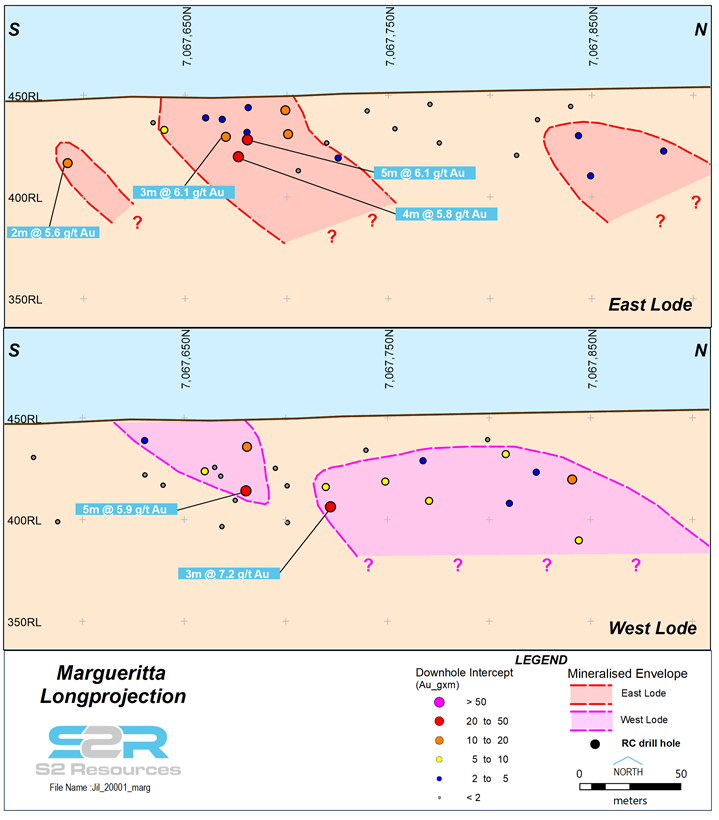 At a district scale, the project is located midway between the Tier 1 Golden Grove Zn-Cu-Au mine and the high grade DeGrussa Cu-Au mine.

The project area contains felsic volcanic stratigraphy considered prospective for VMS style mineralisation, and several coincident multi-element (Cu-Zn-Pb-Ag) soil anomalies such as those at the Woods and Selga-King localities. This prospectivity is further enhanced by the presence of a cluster of untested non-stratigraphic electromagnetic (EM) conductors up to 800 metres long, barite occurrences, and even an occurrence of galena (lead sulphide) found at a depth of 80 centimetres below surface by prospectors whilst metal detecting for gold. 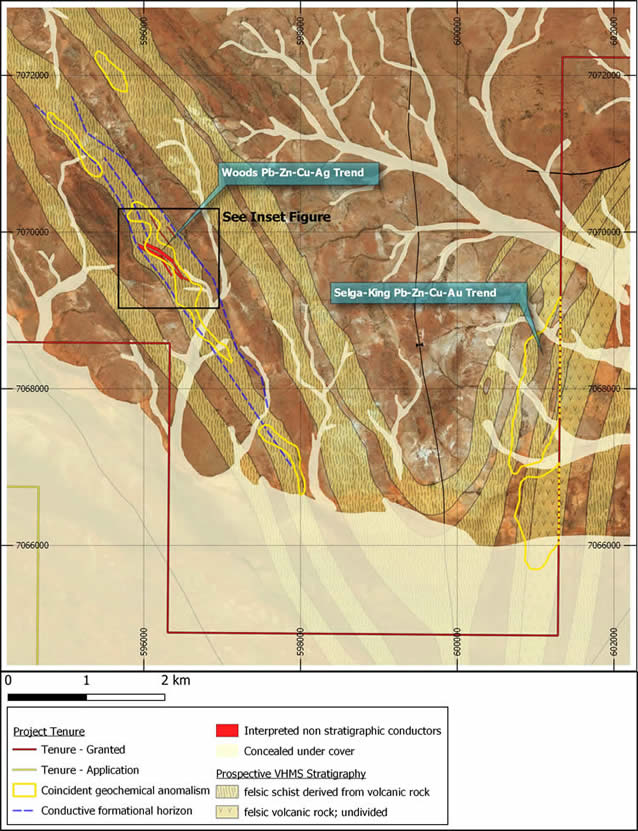 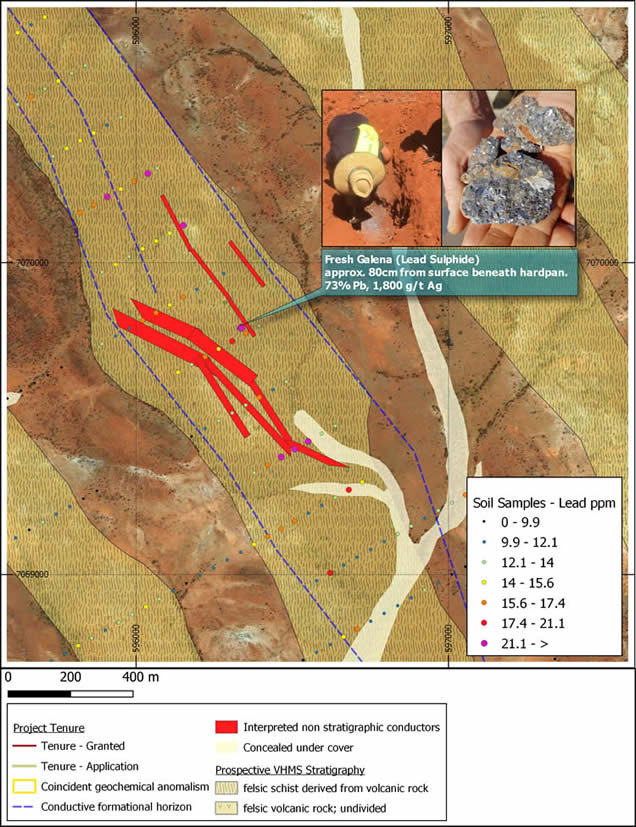 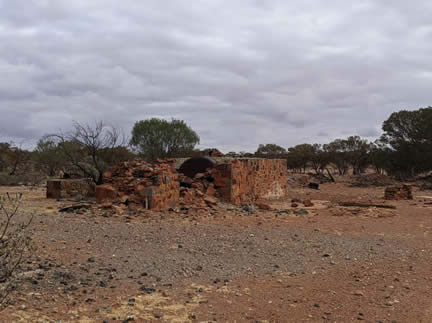 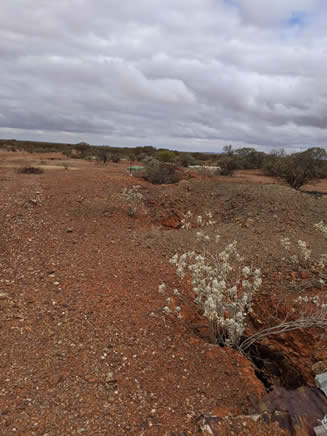 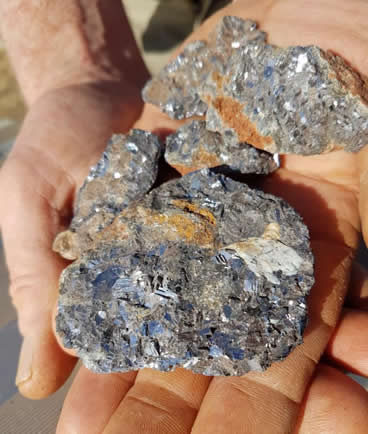