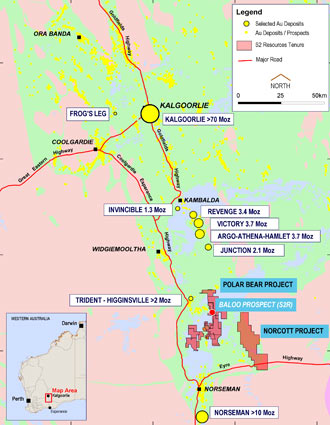 S2 holds the nickel rights over an area of 510 square kilometres to the southeast of the Widgiemooltha and Kambalda nickel sulphide mining centres. The nickel rights area include the Halls Knoll, Taipan and Gwardar nickel prospects, discovered by S2 and its precursor, Sirius Resources.

S2 completed two follow-up diamond drilling at the Gwardar prospect at the start of 2020, designed to test the down-dip extensions to the mineralisation within the prospective lava channel. The drilling was successful with both holes intersecting multiple zones of disseminated sulphides. Of particular interest was the presence of a broad zone of high tenor disseminated mineralisation within a hangingwall flow position within the second hole.

Drilling to date has now defined a 100-metre thick nickel sulphide mineralised lava channel comprising multiple mineralised flows over a strike with of 150 metres and at least 400 metres plunge extent, with the channel remaining open at depth. The large volume of mineralised ultramafic attests to the fertility and potential of this area, which is the southern strike extension of the Widgiemooltha ultramafic package that hosts Mincor’s Cassini nickel mine to the north.

Drilling of prospective ultramafic stratigraphy has defined a zone of high grade nickel-copper-cobalt-platinum-palladium mineralisation at the Taipan nickel prospect.

Nickel sulphide mineralisation has been defined over a strike extent of 250 metres and down dip over 150 metres within two zones.  Both zones are open along strike.  RC and diamond intersections include:

Disseminated nickel sulphide mineralisation has also been intersected at the base of a thick ultramafic package at the Taipan North prospect, located approximately 2 kilometres north of Taipan.  To date mineralisation has been intersected over a 200 metre strike length and is open along strike and at depth.  RC drill intercepts include 40 metres @ 0.47% nickel, 0.02% copper and 0.01% cobalt from 99 metres, including 5m @ 1.02% nickel, 0.09% copper and 0.02% cobalt from 109 metres.

Drill intercepts to date include:

S2 holds an 80% interest in nickel rights in six exploration licences, covering 103 square kilometres of gound adjacent to the Polar Bear project (the Eundynie Joint Venture). The remaining 20% is held by Shumwari Pty Ltd which is a private company run by a small group of project generation geologists specialising in Western Australia. The tenements cover the northern extension of the Baloo trend. In addition the project covers portions of the ultramafic stratigraphy considered prospective for nickel sulphide mineralisation.

S2 has the nickel rights over licences granted covering approximately 256 square kilometres of relatively unexplored ground in a corridor to the east of the Polar Bear Nickel Project.