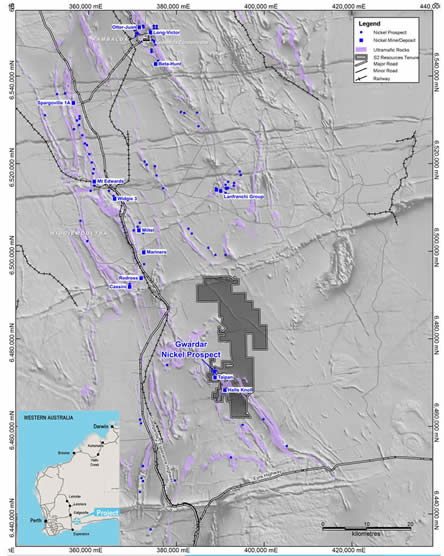 The project covers a significant strike extent of ultramafic stratigraphy that represents the southern continuation of the Kambalda – Widgiemooltha sequence that hosts several world class nickel sulphide mines to the north.  Previous exploration has confirmed the presence of komatiite hosted nickel sulphides at several localities within the project area, including Gwardar, Taipan and Halls Knoll.

S2 would like to acknowledge the traditional owners of the land on which the Polar Bear project is located, the Ngadju, and we pay respect to their elders past, present and emerging. See also Working With Traditional Owners.

S2 also recognises that the area is home to a diverse community of stakeholders and hopes to work together with aboriginal representatives as well as the local residents and businesses of Norseman in a collaborative and constructive manner to unlock the economic potential of the area whilst preserving its environmental values and quality of life for all. See also Community Relations.

Drilling at Gwardar has defined a +100-metre thick lava channel comprising multiple mineralised flows over a strike width of at least 150 metres and extends in excess of 400 metres down plunge, and remains open at depth.  Mineralisation is present as broad zones of disseminated nickel sulphides, with localised narrow zones (<30cm) of massive sulphides on the basal contact.  Drilling has also identified localised zones of remobilised vein and stringer sulphide, extending up to 30 metres into the footwall sequence.

Better drill results from Gwardar include:

Nickel sulphide mineralisation has been defined over a strike extent of 250 metres and down dip over 150 metres within two zones, with both zones remaining open along strike.  Better RC and diamond intersections include:

Better drill intercepts to date include:

S2 Resources holds an 80% interest in the nickel rights in six exploration licenses, covering 103 square kilometres of ground adjacent to the Polar Bear project (the Eundynie Joint Venture).  The remaining 20% is held by Shumwari Pty Ltd which is a private company run by a small group of project generation geologists specialising in Western Australia. The tenements cover the northern extension of the Baloo trend.  In addition the project covers portions of the ultramafic stratigraphy considered prospective for nickel sulphide mineralisation.

S2 Resources has the nickel rights over licences granted covering approximately 256 square kilometres of relatively unexplored ground in a corridor to the east of the Polar Bear Nickel Project.