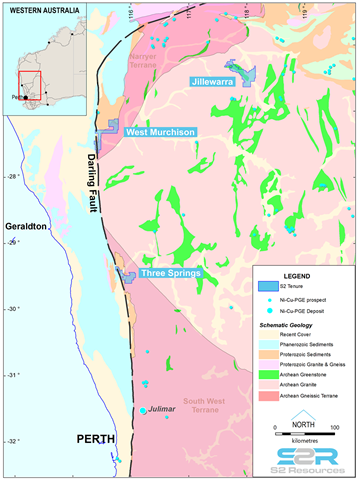 S2 holds a 100% interest in three Exploration Licences covering 693 square kilometres, prospective for magmatic nickel-copper-PGE mineralisation at the West Murchison project, located approximately 500 kilometres north of Perth.  All three tenements were granted in May 2021, following the finalisation of a heritage agreement with the Wajarri Yamatji #1 Native Title group.

The West Murchison project is situated on the north-western margin of the Archean Yilgarn Craton within the Narryer Terrane, proximal to the Darling Fault which is long lived structure dating back to the Proterozoic.  The area is considered prospective for intrusive, mafic-ultramafic related nickel-copper-PGE mineralisation due to:

Limited early soil sampling by S2 over one of these intrusions termed the Woodrarung target, located in the northern portion of the tenement package, identified a coherent coincident nickel-copper anomaly over weathered ultramafics and a magnetic high.  This anomaly is 200 metres wide at the 100ppm copper threshold, with a best result of 550 ppm copper with coincident strongly anomalous nickel (up to 1,562 ppm).  It is open to the east where the interpreted southern margin of the underlying mafic-ultramafic body extends for a further kilometre under cover.  The same program also identified a significant gold in soil anomaly as well as a single rock chip sample grading 0.83g/t gold.  Modest platinum and palladium anomalism was also detected in soils at Woodrarung.

S2 would like to acknowledge the traditional owners of the land on which the West Murchison project is located, the Wajarri Yamatji and the Mullewa Wajarri communities, and we pay respect to their elders past, present and emerging. See also Working With Traditional Owners.

S2 also recognises that the area is home to a diverse community of stakeholders and hopes to work together with pastoral landowners, aboriginal representatives as well as the local residents and businesses of Murchison and Mullewa in a collaborative and constructive manner to unlock the economic potential of the area whilst preserving its environmental values and quality of life for all. See also Community Relations.